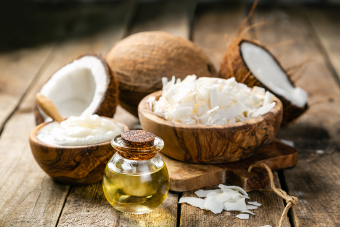 MCT OIL Pure C8 is a highly concentrated dietary supplement, designed to aid weight loss and restore vitality quickly and effectively. MCT oil is distinct in that it contains only medium-chain triglycerides (MCTs), the fatty acids of which are not stored in the body. They are a source of immediate and bioavailable energy and accelerate the burning of calories.

This natural product is produced exclusively from coconuts. But while ordinary coconut oil contains only 5% caprylic acid, MCT OIL Pure C8 contains at least 98% – that’s more too than most MCT oils on the market.

The exceptional high-quality composition of this product delivers the maximum benefit from the slimming, energising and anti-infectious properties of the saturated fatty acid C8. Consumed either on its own or added to dishes, this nutritional supplement will prove invaluable both in supporting your slimming regime and helping you to stay healthy.

Medium-chain triglycerides and nothing more

As mentioned, MCT OIL Pure C8 contains nothing other than medium-chain triglycerides. MCTs have the advantage of being easier to absorb than long-chain triglycerides (present in our normal diet) which are stored in the body’s adipose tissue before being gradually used as fuel. Conversely, MCTs release into the body short-chain fatty acids, with only 6-12 carbons.

The small size of these fatty acids enables them to pass directly into the blood, without having to be broken down by the pancreas or gallbladder. They therefore enter cells with ease where they quickly start producing ketones (an alternative ‘fuel’ to glucose) which are used as a source of energy by the body.

Why the choice of caprylic acid (C8) for this product?

The medium-chain triglycerides in MCT OIL Pure C8 are not composed of just ‘any old’ fatty acid. This supplement is formulated to provide a maximum level of caprylic acid (C8), constituting 98% of the final product. Also known as octanoic acid, this straight-chain saturated fatty acid is composed of 8 carbon atoms.

C8 was first identified in goat’s milk, hence its name which comes from the Latin for goat - capra. It’s also found at lower concentrations in human breast milk and in palm oil. As for MCT OIL Pure C8, its caprylic acid comes entirely from coconuts.

We’ve deliberately chosen C8 rather than C6 (caproic or hexanoic acid which can cause stomach aches), C10 (capric acid which is known to be less effective than C8) or C12 (lauric acid which is the main component of standard coconut oils). Caprylic acid is distinguished in particular by its ability to fight fungal and bacterial infections. Note too that this supplement is also free of any added excipient.

What benefits are provided by MCT OIL Pure C8?

Acceleration of weight loss by thermogenesis

MCT OIL Pure C8 seems to be particularly effective at stimulating and facilitating weight loss. How? Ingesting medium-chain triglycerides works by boosting thermogenesis, the process of increasing cellular metabolism in the course of which the body burns stored fat in order to provide the energy it needs. According to several clinical studies conducted on this thermogenic effect, consuming MCTs leads to a much greater degree of energy being expended than is the case with long-chain triglycerides. (1) (2) (3) (4)

One Japanese study from July 2019 reported that a diet based on MCTs automatically produced a reduction in body weight and fat mass. (5)

Another aspect of MCT oil which is highly effective for weight loss is that it produces the sensation of satiety much more rapidly. The ketone bodies produced have an effect on the satiety center in the brain, thus reducing the problem of repeated and health-damaging cravings. Which should make your weight-loss diet much easier to stick to... (6)

One study noted that caprylic acid (C8) in particular, may act by modulating the concentration and functions of octanoylated ghrelin, a digestive hormone associated with appetite. The researchers involved suggested its properties could potentially be used as part of a therapeutic strategy to tackle obesity. (7)

Re-energising: refilling your tank to fuel your sports and cognitive activities

Another beneficial aspect of MCTs is that they provide the body with a large amount of instantly available energy. As soon as it is released into the body, caprylic acid will supply energy to muscle cells as well as to heart and brain cells (including neurons), the two most energy-intensive organs in the body. MCT OIL Pure C8 can therefore be used for improving both sports and intellectual performance. Indeed, MCTs have been used by elite athletes for many years.

According to one study, MCTS are used “to treat fat malabsorption, cystic fibrosis, and epilepsy, as well as for weight control and improving sports performance”. (8)

A French study conducted in 2016 also highlighted the fact that MCTs are regularly used for therapeutic purposes, including as a source of energy for patients suffering from pancreatic insufficiency, altered lymphatic transport of chylomicrons and fat malabsorption problems. (9)

Let’s look more closely now at the anti-infectious properties attributed to caprylic acid C8, the main ingredient in MCT OIL Pure C8. This fatty acid is primarily recognized for being a powerful fungicide, capable of destroying pathogenic fungi and yeasts by attacking their cell membranes. (10)

Thus caprylic acid is usually used for stopping the spread of Candida albicans, a pathogenic yeast that develops in the large intestine, the growth of which can cause a fungal infection that threatens the immune system: candida, or thrush. C8 appears to work by down-regulating the cell-elongation gene Ece1, by overexpressing the negative regulators Nrg1 and Tup1, and by arresting the yeast’s cell cycle at G2/M and S phase. (11)

Caprylic acid also has important anti-bacterial properties, and thus protects the intestinal barrier. (12) According to one study, it is also able to inactivate certain viruses. (13 )

Have you always wanted to try the ketogenic or ‘keto’ diet? If so, MCT OIL Pure C8 can be a real help. Let’s remember that this diet consists of eating more healthy fats and fewer carbohydrates, in order to reach a state of nutritional ketosis.

When the body is in ketosis, it draws its energy directly from fats and so burns them. The ketone levels in the body increase and appetite decreases. By facilitating the production of ketone bodies, MCT oil makes it possible to eat a little more carbohydrate and a little less fat (making the diet easier to stick to) for the same result. It has been shown that MCT oil is more effective than classic coconut oil for producing and maintaining a state of ketosis.

Apart from weight loss, are there other reasons to try this diet ? Several studies have shown the ketogenic diet to be an alternative, effective therapy for most cases of epilepsy. (14) (15) (16) One study even concluded that “the ketogenic diet is one of the most effective treatments for drug-resistant epilepsy”. (17) Adopting a keto diet based on MCT oil may also offer benefits for cancer patients. (18)

Attention: do not start a ketogenic diet before consulting your doctor, especially if you’re suffering from a disease.

Let’s finally turn our attention to the effect of MCTs on Alzheimer’s disease. It’s known that brain cells affected by this degenerative disease lose their ability to absorb glucose, and that this dysfunction is accompanied by the release of free radicals and an increase in oxidative stress. However, it has been reported that when cells are fuelled by ketone bodies, as an alternative to glucose, they return to functioning more normally. (19) (20)

A study by American researcher Steven Douglas Maynard came to the specific conclusion that “consumption of caprylic triglycerides increases plasma concentrations of ketone bodies and may be beneficial in cases of compromised glucose metabolism such as in Alzheimer’s disease.” (21)

Other studies have shown that taking MCT oil increased serum ketone bodies and improved memory in several Alzheimer’s patients. (22) (23). One study also concluded that “caprylic acid might find an application in the fight against infections, cancer, aging, Alzheimer’s disease and autism.” (24)

How should MCT OIL be taken? On its own, in a salad, mixed with mayonnaise ...

MCT OIL Pure C8 can be consumed ‘as it comes’, or added to food, for example, as a replacement for olive oil (but avoid frying with it in order to preserve all its benefits).

Mix your daily dose of half to one capful (10-20ml) of MCT OIL Pure C8 with vinegar to make a dressing for salads or assorted crudités, add it directly to soups, mayonnaise, smoothies or yogurt... Use it as you please - let your creativity run wild!

Have you heard of ‘Bulletproof Coffee’?

Very much in vogue in the United States, Bulletproof Coffee, consists of adding a knob of butter and a dash of MCT oil to your morning coffee.

According to its devotees, the aim of drinking Bulletproof Coffee is to increase your energy levels, improve your concentration, and stimulate your mental acuity... In other words, to elevate you into a state of hyper-performance. The presence of fat in the coffee may also enable you to skip breakfast without feeling the need for elevenses, and thus help you avoid the kind of snacking that’s bad for your figure.

Bulletproof Coffee has a number of fans among sportspeople, US film and television celebrities (including the actress Shailene Woodley from Divergent and the TV host Jimmy Fallon...) and bio-hackers, the self-improvement enthusiasts who use nutrition to optimise their abilities. Even we at SuperSmart have started drinking it!

And how about you – are you ‘up for’ adding a little butter and MCT OIL Pure C8 to your coffee?

Other supplements that can be combined with MCT oil

If you want to further accelerate your weight loss, you combine MCT oil with other supplements available to buy at Supersmart, such as Weight loss Formula. This highly popular slimming formulation is designed to stimulate your metabolism and reduce absorption of sugar and fats.

And to boost your energy levels even more, combine MCT oil with a regular dose of Peak ATP, a patented form of adenosine triphosphate which helps increase vitality, strength and recovery.

Adults. Take half to one capful (10ml-20ml) a day. The dosing cap is graded at 5ml intervals.

Because of the high purity of MCT OIL, we recommend you start taking it gradually. During the first 10 days, aim to take your daily amount spread over several doses, for example, take 4ml of MCT OIL 4 times a day.

No reviews for this product yet

Subscribe to our newsletter
and obtain a 5% permanent discount
Our selection of articles
Why start a ketogenic, or keto, diet?

The keto diet, high in fat, produces rapid weight loss. Here’s a quick rundown of what you need to know before launching into a diet of this kind.

Lipolysis is the body’s mechanism for breaking down fats to make them absorbable and usable. There are two types: gastrointestinal lipolysis, which takes place during digestion, and adipocyte lipolysis, concerned with stored fat, which is often referred to as ‘fat-burning’. How can you use it to help achieve your slimming goals?

What is thermogenesis? What can you do to boost it?

You may have heard that thermogenesis helps you lose weight, but what exactly is it? How does it work and how can you stimulate it to enhance a diet plan? Supersmart has the answers.