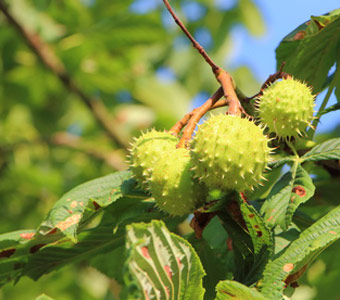 Horse Chestnut Extract is a natural venotonic supplement based on horse chestnut. Thanks to its exceptional richness in escine (normalization at 20% against 3 to 6% on average), it contributes to improve blood circulation and helps to reduce the circumference of the legs.

Who should take Horse Chestnut Extract?

Horse chestnut extract is for anyone who suffers, either regularly or occasionally, from the following symptoms:

It’s estimated that 25% of women, and around 10-15 % of men are regularly affected by at least one of these symptoms.

What is horse chestnut?

The horse chestnut tree which bears the fruit originated in the Balkans (especially in Bulgaria and Albania) and is now found throughout Europe.

Traditionally, the whole seed was used (and sometimes even the leaves and bark), but since it was discovered that it contained an anticoagulant called aesculin, producers of natural extracts are required to remove this molecule.

However, Horse Chestnut Extract’s content of the active substance aescin has been increased as it is responsible for the supplement’s beneficial effects on the circulation . Our supplement also contains other active compounds responsible for its synergistic effect:

Horse chestnuts are often confused with chestnuts because they are morphologically very similar.

What is venous insufficiency?

Venous insufficiency is characterised by changes to the vein wall (leading to the development of varicose veins), hormonal fluctuations (resulting in increased elasticity of the vein wall) and dysfunctional valves.

It manifests in poor blood flow in the veins. It’s mainly the legs which are affected – they become heavy, painful and swollen as blood accumulates. It eventually leads to the permanent formation of unsightly varicosities: damaged veins that are blueish, twisted and prominent.

What are horse chestnut’s mechanisms of action in relation to blood flow?

The aescin it contains maintains the permeability and tone of the vein wall (venotonic effect) (2), which helps blood return to the heart, particularly in the superficial capillary vessels (3).

These effects are due to three distinct mechanisms:

A number of studies have shown additional effects for aescin:

What does science have to say about horse chestnut?

A very large number of trials have been conducted on horse chestnut in people with venous insufficiency. These trials have:

Are there any risks associated with taking horse chestnut?

Horse chestnuts are sometimes described as poisonous. This is because of a toxin called aesculoside which has been carefully removed from the supplement Horse Chestnut Extract.

Apart from this, the only other change is the increase in aescin, a thoroughly well-tolerated molecule.

What are other measures can be combined with horst chestnut supplementation?

If you suffer from circulation problems, particularly in the legs, it’s important to be aware of risk factors to avoid and positive steps to take to boost the action of venotonics:

Can Horse Chestnut Extract be combined with any other supplements?

How should Horse Chestnut Extract be taken?

A number of scientific studies show that the aescin in horse chestnut offers excellent bioavailability, particularly when the natural extract is taken outside of mealtimes.

It is therefore advisable to take Horse Chestnut Extract in the morning, and again in the evening before bed.

This product should not be used as a substitute for a varied, balanced diet and a healthy lifestyle. It’s important to follow the directions for use, the recommended daily dose and the ‘use-by’ date. It is not recommended for women who are pregnant or breastfeeding, or for children under 15. Keep out of reach of young children. Store in a cool, dry place.

Composition
Directions for use
Take one capsule morning and evening on an empty stomach.

Subscribe to our newsletter
and obtain a 5% permanent discount
Our selection of articles
Krill oil: definition and benefits of this excellent source of omega-3

Heavy legs, varicose or dilated veins... phytotherapy and good plant combinations are an effective solution to the problem of venous insufficiency.